We tend to like what we know and to shy away from what we don’t. Laura and I both like dogs. But she grew up with smaller dogs that were allowed to come inside, and I grew up with larger dogs that were strictly outside dogs. So reaching a consensus on what type of dog we would have was naturally a matter of compromise:

We have a smaller dog who is allowed to come inside.

To be fair, I should say that Laura never had cats growing up, so my “turn” to have my way was when we got a cat about six years ago. The girls named him Handsome. Well, first they named him Eloise, until the vet told us that name was just not appropriate. One of the girls suggested Handsome because, as she put it in her three-year-old logic, “Girls are pretty, and boys are handsome.” The name was OK, except when I had to go outside and look for him when he got out: “Where are you, Handsome?” I would call; “Come back, Handsome!” One day it hit me what I was saying, and after that I didn’t call him by name outside the house.

But other than his name, he was just about the perfect cat…no trouble, no shedding, no mess. Sadly, he recently disappeared. We think he may have met up with some coyotes nearby.

Let me get back to dogs, as this post is really about our dog, Pepper. Pepper is some sort of schnauzer/terrier mix. As little dogs go, he’s fairly well-behaved and has a good personality. He and Handsome were close to the same size and got along well.

Pepper just came home today from a week in captivity. While we visited family for a week, he stayed with some friends from church who board dogs. He had a good time. He even sent us a Facebook message on the Fourth, wishing us a Happy Independence Day! After all that time away, much of it in a smallish kennel, he’s obviously glad to have free reign of the house and yard again. Thinking about his time being boarded and his return to the freedom of home got me to thinking about when we first found Pepper…

Pepper came into our lives as a stray that wandered up at the church where I serve and where our family attends. For whatever reason, I’ve noticed that strays turn up at churches often. Maybe people dump them out, thinking someone will have compassion and take them in. But in Pepper’s case, I think he had been on his own and wandering aimlessly for a while. He was a “teenager” at the time, not fully grown, but close to it. His fur was very thin from malnutrition, and he had sort of a male-pattern baldness thing going on on top of his head. He was painfully thin, yet he was friendly and even playful.

I didn’t really want a dog, and I knew better than to do what I did…but I fed him. We had some really nasty, cheap hot dogs in the church fridge that nobody else wanted to eat, so I grabbed a couple for him. He immediately scarfed them down, so I gave him a couple more. That afternoon, the girls stopped by and saw him, and the rest was history.

Pepper came to live with us. No longer did he have to scrounge for food; he got fresh, nutritious dog food every day–plus a good bit of the cat’s food, which he seemed to prefer. While he had been a loner before, he now had a house full of friends eager to spend time with him. Of course, four of those friends were girls who might occasionally put him in a teddy bear dress or rock him in a crib against his will, but they were friends, nonetheless. While he once had to seek out shelter each evening, he now had a safe yard and a dry and comfortable home, and a little dog bed in Laura’s and my bedroom. (Not gonna lie, I’m still not crazy about that part.)

So what’s the point of all this? It’s really about freedom. See, when Pepper had no home, some would say he was free. He did what he chose, when and where he chose. But for all the choices he had, none of them were really great choices. He could go anywhere, but he had no guarantee of shelter. He could eat whatever he found, but he might not find anything worth eating for days. He could make friends with any dog or person that came along, but who wants to be friends with a mangy-looking stray?

Now that he lives with us, you could say he has less freedom. He isn’t allowed to roam the neighborhood or hunt for his own food. He’s not the master of his own fate. But he is well-fed, and safe, and cared for, and cared about, and happy. And so, I would argue, he is more free now than he ever was as a stray.

It reminds me a lot of the Prodigal Son. He went off into the world, but all he found was heartache and loss. Only when he came back to the Father did he find freedom, in the safety of the Father’s care. But just having freedom doesn’t necessarily mean you enjoy that freedom. The Prodigal’s Brother was upset at the party thrown for the Prodigal’s return–after all, the Brother had never had a party with his own friends–until the Father reminded him that he already access to everything the Father had and could enjoy it at any time.

So with freedom and independence still fresh on our minds, consider that freedom isn’t necessarily found in the ability to do whatever you want, whenever you want. Real freedom from God will have boundaries, but those boundaries are there for your protection. And if you have already found that freedom, don’t neglect it. Enjoy it to the fullest. Party with your friends and celebrate God’s gift of true freedom:

For you were called to be free, brothers; only don’t use this freedom as
an opportunity for the flesh, but serve one another through love.
Galatians 5:13 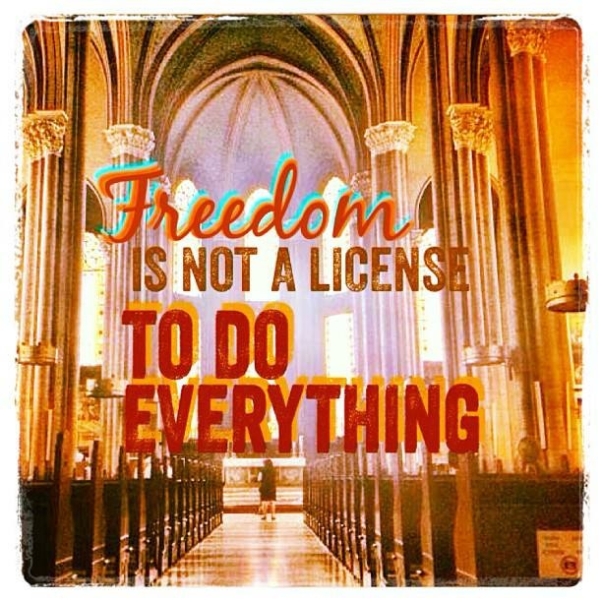 PS: Even if you are free, perhaps you may find yourself in a season of captivity, like Pepper did while we were on vacation, or like the children of Israel did in Egypt (or Assyria, or Babylon…). Although we knew we were coming back soon, Pepper had no idea. And even though your captivity may seem permanent, God has already brought you freedom through Christ, and your trouble will not last forever.

PPS: For those who are wondering, after several months of nutritious dog (and cat) food and small pieces of American cheese, Pepper’s male pattern baldness reversed. He now has a full head of hair. This cure is not, however, recommended for humans.