Take a look at this picture:

On the left is our eldest daughter, Audrey; on the right is Laura, my wife. Audrey and her twin sister, Abby, were born four months prematurely, at just over 23 weeks gestational age. The odds are against babies born at that age. Even today, ten years later, only about a third of babies born at that point survive. And only about a third of the survivors grow up without severe health issues. So, the fact that she is climbing a pole to ride a zip line in the above pic is a pretty big deal.

But there’s more. Audrey’s battle didn’t begin when she was born. It really started about 8 days before. That’s when Laura and I walked into our local hospital–then only 22 weeks into the pregnancy–and they found that Laura was fully dilated, fully effaced, and that Twin A (who we had already named Audrey) was in the birth canal. If you’ve ever had a baby or been there when one was born, you know that the birth canal is where the baby goes a few minutes before he or she is born. Not eight days before. In fact, shortly after we arrived at the hospital, they started bringing in surgical tools, warming beds, and the like, getting ready to deliver two very tiny babies, who at that point had less than a 10% chance for survival. The reason they weren’t delivered that night is part of a larger story for another day (short version for now: GOD); the relevant part for now is that Audrey spent eight days in a part of the body that was not designed to protect a tiny, growing baby.

Our guess is that sometime in those eight days is when Audrey sustained some damage to her brainstem and cerebellum. Many preemies have some bleeding in and around the brain after birth, and Audrey had a little of that. But spending so much time in a very precarious location, we presume that somehow she sustained injury to these areas near the base of her brain.

Because of these injuries, Audrey’s balance and coordination are affected. “Ah,” you might say, “that doesn’t sound too bad. It could have been much worse.” And you would be right. Things could have been much, much worse. But consider that, out of all the things you do in a day, almost all of them require balance and coordination: Walking (Audrey used a walker and braces until she was about 4). Writing. Climbing stairs. Jumping. Running. Catching and throwing. Turning lights on and off. Making your bed. Opening food packages. Easy stuff for most of us. Not easy for Audrey.

On top of that is Audrey’s vision. To summarize: it’s not good. Her field of vision is less than normal, and the clarity of her vision is too poor for them to correct it to 20/20. When she goes to the eye doctor, they project LARGE letters on the wall, and she still can’t read them until they put up the REALLY LARGE letters–and that’s with her glasses on. She also has strabismus, which means that her depth perception is very poor.

So Audrey, from infancy, has navigated the world around her with significant deficiencies in her ability to see, manipulate, and interact with that world. Does it slow her down? Yes. But does it stop her?

If you’re asking that question, then you don’t know Audrey.

Audrey is a fighter. She made that clear from the beginning. She does not give up, and she does not like for people to do things for her. When she was younger, we sometimes had to discipline her for pushing us or her siblings; but in almost every case, the reason she pushed was that we were trying to help, and she wanted to be able to do things for herself. Thankfully, she is learning more and more that help can be a good thing. But she is still as independent as ever.

Two summers ago, Audrey and her sisters went to a friend’s birthday party. The party featured a giant inflatable water slide. The kids would climb the inflatable stairs, turn the corner and slide into a pool of water at the bottom. Nice, simple, fun. Only it wasn’t any of those things for Audrey. She couldn’t climb the stairs. They were just too slippery, and there was too little to hold onto for her to make a go of it. She would make it a step or two, then she slid back to the bottom. But she didn’t give up.

At first, the other kids tried to help. They got behind and tried to push her up. They tried to pull her up from in front. Nothing worked. Some of their strategies had a degree of success, but she never made it to the top. Eventually, this got old. So the kids continued to climb the steps, making their way around Audrey and her attempts to scale upward. As more time passed, instead of stepping around her, they sometimes stepped on her. Still, she was undeterred. Once, she climbed to the very summit but, unable to climb over the ledge at the top, she slid back to the bottom.

This went on for an hour. Laura and I both tried to offer help, but she would have none of it. She was determined to make it, and make it alone. As I watched, I found myself fighting back tears.

How she kept her strength and her resolve for so long, I don’t know. But after an hour of trying, and while Laura and I held our breath for fear of another failed attempt, Audrey finally made it all the way up and crawled onto the top level. The kids–and several of the adults following the saga–broke into spontaneous and enthusiastic applause. We celebrated with her when she slid to the bottom, but it was short-lived: she was ready to go again.

And she did. After making it up the first time, she found it much easier and made the circuit a number of times before the party was over.

So, you see the determination of the person on the left of this picture:

If Audrey’s determination is matched by anyone, it is the person on the right of this picture. My wife is unbelievable. Consider…

I told you earlier that Audrey was in the birth canal for eight days. That seems very bad for Audrey, and it was. But consider being the Mommy in that situation. A Mommy who was unprepared to go into labor barely halfway into her first pregnancy. A Mommy who was shocked to hear that her babies would likely be delivered in what she thought was a precautionary ER visit…and that after they were delivered, they would probably die. A Mommy who, when the decision was made to take all possible measures to postpone delivery to give the babies a better chance, was hooked to an IV and given a cocktail of powerful drugs, then tilted head downward in the bed to relieve all pressure on the placentas to keep her water from breaking or delivery occurring simply from gravity. Not that contractions weren’t present, mind you. They were. Laura had contractions continuously–and painfully–for eight days. She labored for two days at our local hospital, then, thanks to an ambulance ride with some heavier drugs, we made it to a bigger hospital with better facilities to care for the girls when they were born. We were assigned to a new doctor, a stranger who knew nothing about us, not we about him. He pulled a card out of his wallet and told us of the girls’ survival chances (8%, he said), then Laura was wheeled off to a tiny, cramped room, underground with no windows.

This room wasn’t meant for long-term stays. It was for women who were on the verge of delivery. And Laura was on the verge, but you usually only stay on the verge for a few hours. So for days we listened to the screams of other women in high-risk situations, as they were wheeled in and then soon after taken to delivery.

Giving up is not in Laura’s nature. I could tell you story after story of her determination, her courage, her strength. And perhaps we will get to some of those stories another day. But I think her strength is best exemplified in giving up her comfort, her freedom, her “rights,” her privacy–her life–as she lay in that bed, fighting to give life to her daughters.

Now that you know more of the story, perhaps you will find a deeper appreciation for what you see in this picture from a church camp last week: two fighters, working together to achieve yet another unthinkable goal. Audrey couldn’t have done this by herself; Laura literally had to pull her up most of the way. Laura said it was physically one of the hardest things she’s ever done. And the effort Audrey had to exert to make the trip, the effort to even decide to attempt it, was huge. But together, these two fighters reached their goal. And together, they enjoyed not just the too-fast, too-short ride to the bottom:

They enjoyed the climb. 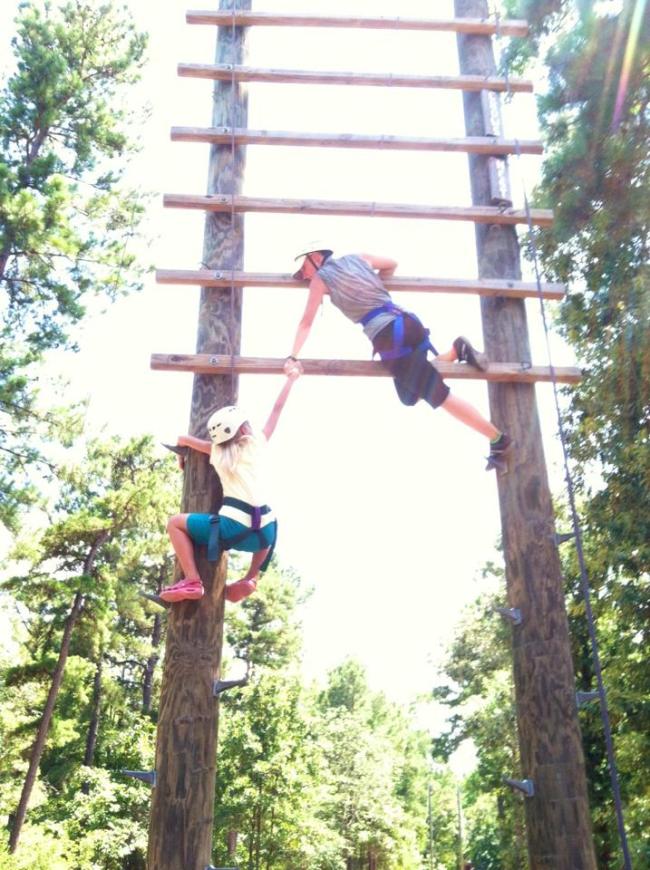