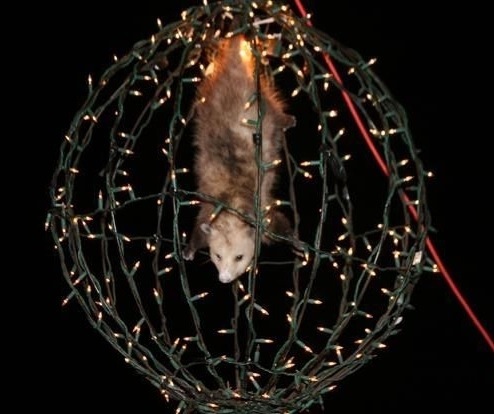 I grew up in the tiny town of Tallapoosa, Georgia. When I tell people where I’m from, most of them think it’s a town in Florida, like Tallahassee, or Alabama, like Talladega. And although its location just off Interstate 20 means many people have driven right through it, few of them remember having done so. However, all that may change now…

Because last night, Tallapoosa was featured in an episode of Here Comes Honey Boo Boo.

It’s something I never expected to happen. Alana “Honey Boo Boo” Thompson and her family live in McIntyre, Georgia, a good two and a half hours southeast of Tallapoosa. (A sidenote: although McIntyre is in central Georgia, most Georgians would think of it–and anything else south of Hartsfield-Jackson Airport–as “south Georgia.”)

The reason the Boo Boo family made the trek to Tallapoosa was the city’s greatest claim to fame: a New Year’s Eve celebration known as the “Possum Drop.” It’s exactly what it sounds like; a real, (formerly) live possum, , preserved by local taxidermist Bud Jones, is placed inside a lighted ball and dropped from a pole in the city’s downtown area to ring in the New Year. The reason for this peculiar tradition? The city began a marketing campaign several years ago to brand itself as “Possum Snout,” an early name given to the fledgling community in the 1800’s, prior to Tallapoosa’s incorporation.

What do Tallapoosans think about all this attention? The reviews are decidedly mixed. While some I talk to are excited about the city’s newfound publicity, others feel that attention gained by possum drops and sightings of reality tv stars comes at a cost, that being a loss of civic dignity.

I’m not here to debate Honey Boo Boo’s appearance or the Possum Snout branding. I know the people who came up with the Possum Snout campaign. They are fine, upstanding citizens, and frankly not the type I would have expected to choose “Possum Snout” as the town’s moniker. I don’t know who arranged the HBB appearance, but I’m sure it was done with the best intentions. My purpose here is just to shed some light on the people of Tallapoosa, in hopes of counteracting any caricatures that might be drawn from last night’s television show:

So no, don’t make fun of Tallapoosa. It’s like my Momma always said: don’t you poke a possum with a stick. Because that refined Tallapoosa southern dame just might go redneck and spit her snuff in your eye. And that good old boy in the overalls and the ball cap…well, he’s probably a better example of humility, grace, and class than you or I will ever be.